After removing a ton of my old work from the site I decided it was time to make an image archive of some of my old work. Eventually I'm going to put some of my little kid drawings on here too. Not going to lie, I'm pretty pumped to finally justify making a page like this. 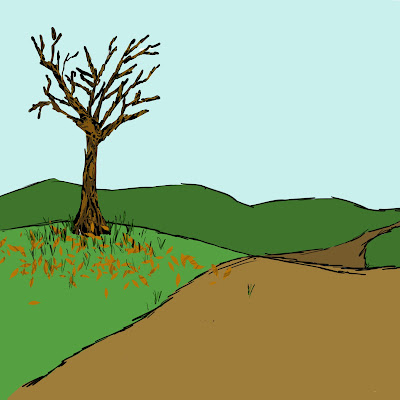 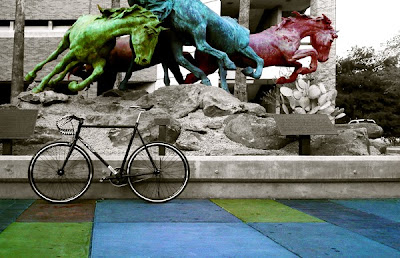 [NOV 2008]
This is a photograph I manipulated in Photoshop and won an award with that made me question my plan to major in something something business big money degree. 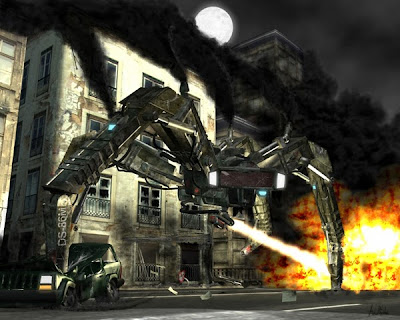 [DEC 2008]
I was messing around in blender (3d software) because I wanted to win a Gnomon contest. This. Took. FOREVER to make. All my available time for over a whole month. I did some mouse painting work in paint.net (painting software). I painting in the smoke with a freak'n mouse. haha. 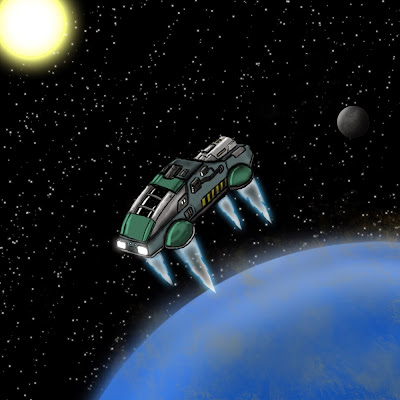 [NOV 2009]
This is the first thing I painted when I finally got a copy Photoshop CS3 on my computer and my own Wacom tablet. Probably took me 8 hours to do. It's a Battletoads ship so it's cool. 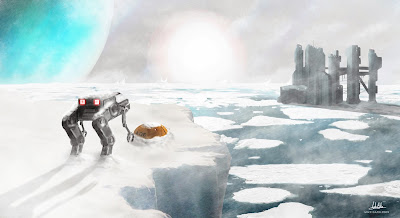 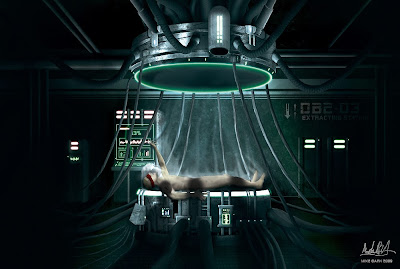 [NOV 2009]
My first really real painting I did for a Gnomon contest. Took me god knows how long, probably around 70 hours. Hurts to just think about. This is easily my least favorite thing I've ever painted.

[MAY 2010]
Have you ever had that holy shit moment where you take a step back from your painting and are just blown away that you made something awesome appear from a blank canvas? This was the first time I ever felt that and this became the painting that made me want to become a... digital draw-ist? I didn't know what it was called but I wanted to be apart of whatever that job was that let you draw all day.

[MAY 2010]
So I guess you could say things are getting pretty serious... 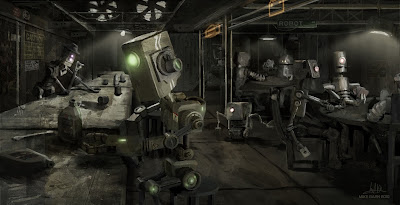 [JUL 2010]
Looks like I'm starting to learn a very wrong way of laying out perspective and simultaneously mixing 3d with my work. I still love this piece. 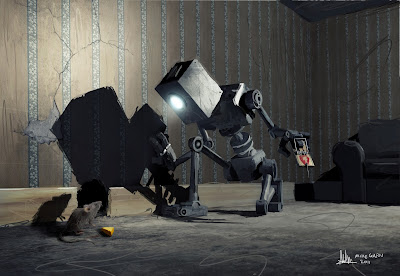 [NOV 2010]
Got a couple of awards for this one while at Mesa Community College. 3d model in blender then painted over top. This was during my graduating semester from Community College, right before getting an Associates in Art. I'm not sure where I got the energy for all this, I was in school 16 hours a day, working full time delivering pizza, managed to barely pay my bills for my apartment, and somehow found time to do these paintings that would take me weeks. I do remember during my last exam I was sitting there, hadn't slept in 48 hours, and was blasted with so much caffeine my hand shook as I circled in answers on my Scranton. Life was hardcore.

[JAN 2011]
First matte painting. What a strange time where I wish I would have stopped looking for shortcuts and started learning the fundamentals of painting. I was still in community college at this point, but having gotten my associates I was just taking random classes trying to figure out what to do next. I almost ended up going to Collin's College for game design. A couple hours before I officially handed them the first payment that over 4 years would total 90K, I looked at some of their graduating student's portfolios. Not to be a total dick, but it was some of the worst work I'd ever seen. A little more research and I discovered what a joke their college truly was and clearly they were taking advantage of my inexperience. I dodged a massive bullet. 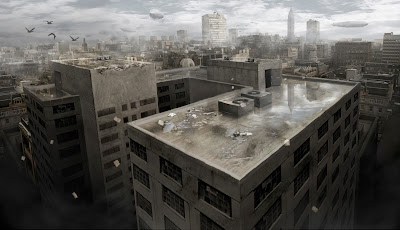 [MAY 2011]
Another matte painting. I actually drew in the foreground building then obviously used photos for the windows. Cool picture but I've never felt right taking credit for it because I got the starting plate from a Google search image that I heavily relied on for the background buildings. That fog is so gross. haha. 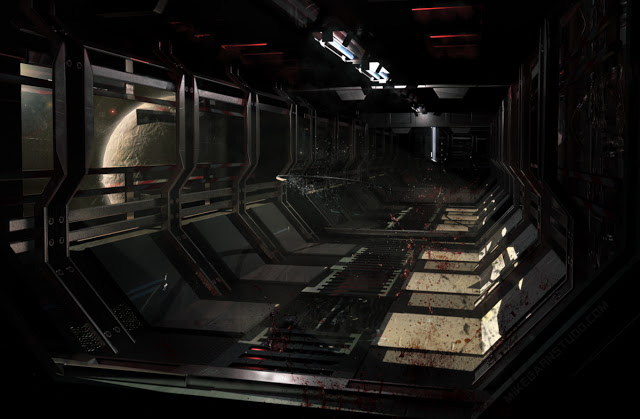 [JUNE 2011]
Lets see this must have been done in Maya. If I can recall correctly I won 3rd place in a Gnomon contest with this. I was playing a lot of Dead Space at the time. 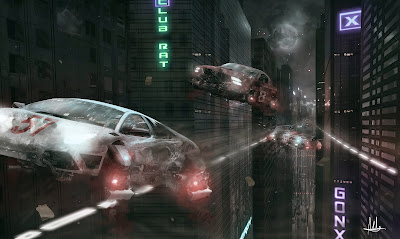 [OCT 2011]
First place in a Gnomon Contest! This is mostly matte painting so its basically a big photo manipulation of a bunch of images and painted over like crazy. Soon after this was about the time I realized I wanted to learn how to paint with out any photo aid. About here is where I decided officially that I wanted to be a concept artist. You'll notice the 7 month gap between this painting and the previous one, I barely painted during that time, I was getting pretty serious about a band I was in, trying to sell a pilot for a TV show I helped write, and working driving school buses. I quit the TV project and the band broke up soon after leaving me with one of my most valued life lessons. Nobody will ever care about your future as much as you should.

[MAY 2012]
Finally on the road to learning fundamentals with a long road ahead!

[JUNE 2012]
I like to call this the Feng Zhu stage. I was watching Feng Zhu YouTube tutorials pretty exclusively. I watched up to episode 50 at least 3 times, some episodes more than that. You can tell because my fog was out of control. Also I was desperately trying to get into the Feng Zhu School.

[JUNE 2012]
Won 3rd place in a Gnomon Contest with this piece. Those contests really drove me. [JULY 2012]
Ughhhh that anatomy. I really didn't want to put this one up.  By August 2012 I gave up trying to get into the Feng Zhu School in Singapore, I couldn't find a way to get the 100k loan to do it. I was so bummed about that. In the end I'm grateful I never got into that school, I think it would have been a mistake. 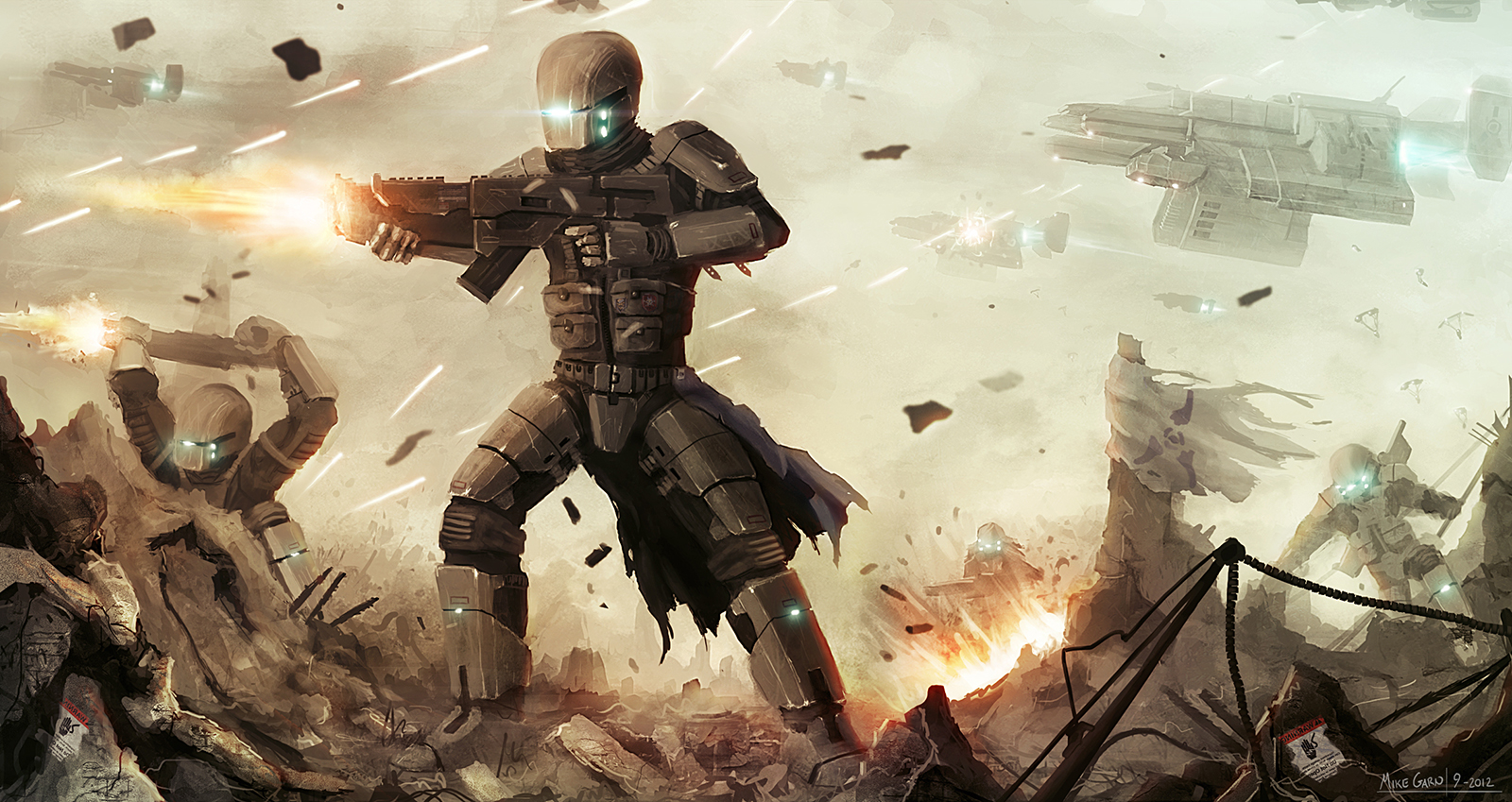 [SEPTEMBER 2012]
Ah yes, another gross image. This was part of a project I started for a massive 25 piece portfolio to get a concept art job. I was 2 months and 8 images in when I realized I still sucked. I decided to go back to my studies. That was a very frustrating time, I was so disappointed with myself. I felt trapped but I kept pushing. 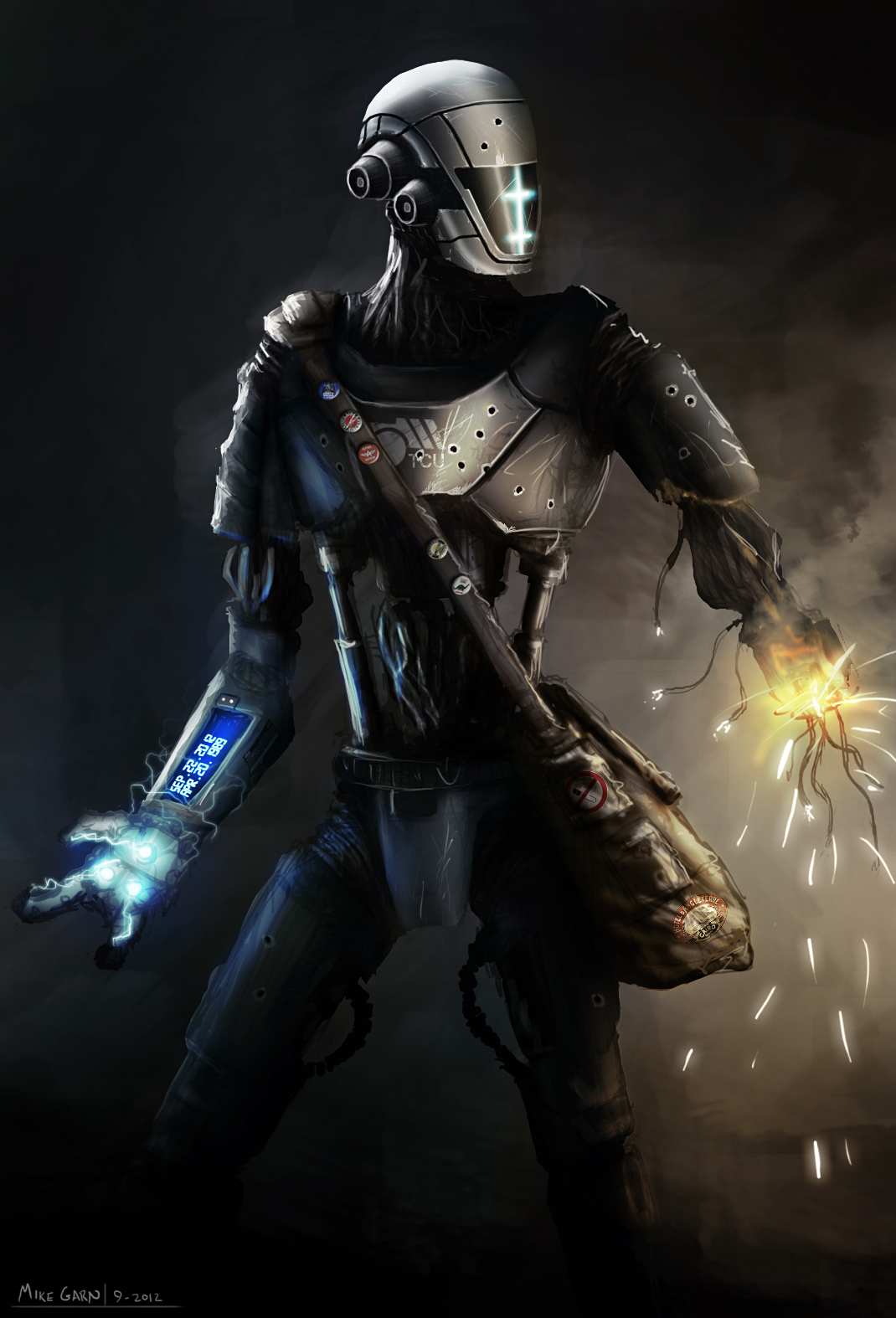 [SEPTEMBER 2012]
Another critical breakthrough in my artistic development, fueled to overcome recent failures. I was starting to feel some Dave Rapoza influence creeping in. This piece was a total accident though, I still had no idea what I was doing, but it was the beginning of learning materials. 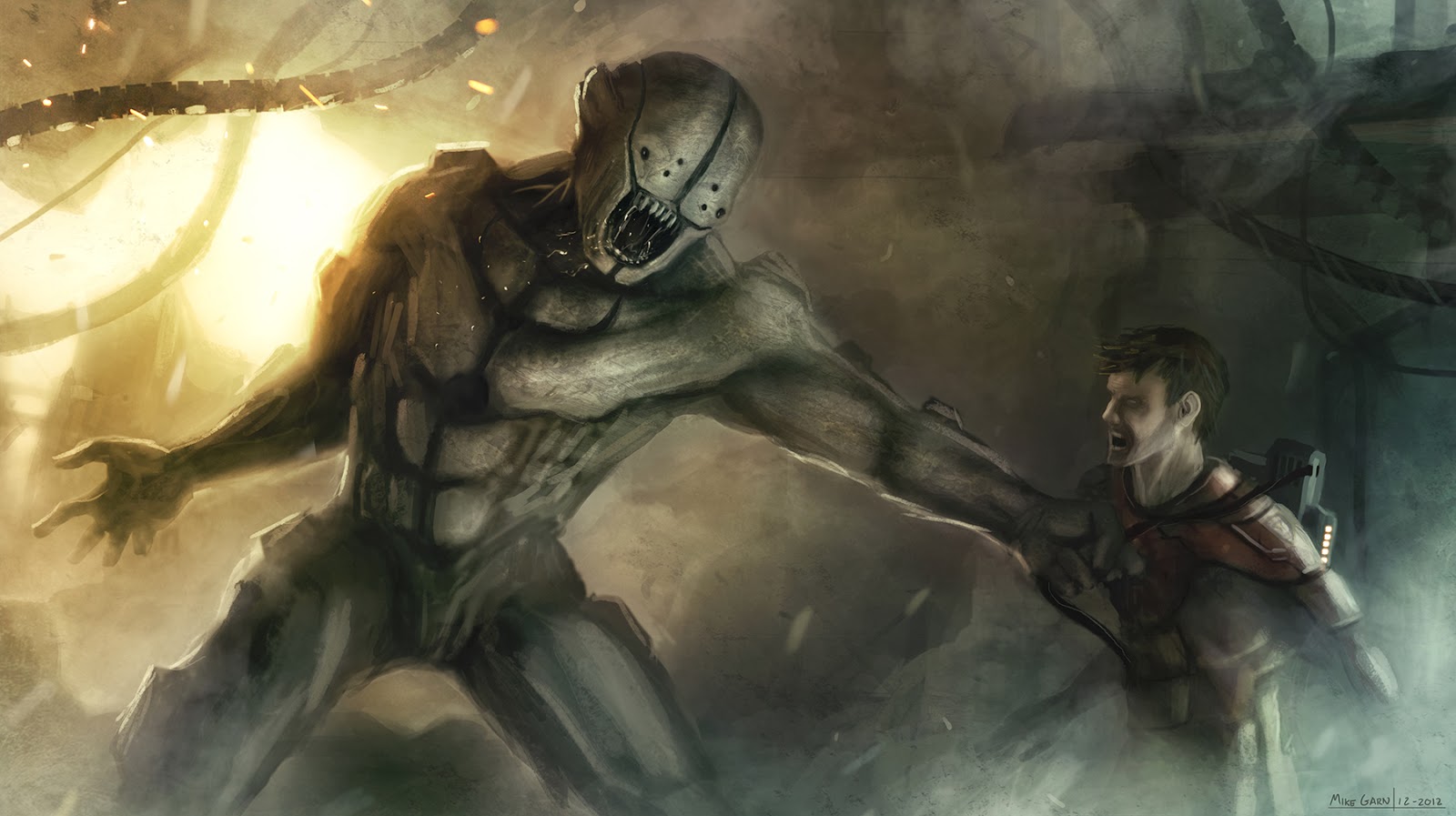 [DECEMBER 2012]
Starting to study dynamic characters. Heavy influence by Kekai Kotaki's compositions and characters and a bit of Frank Frazetta as well. 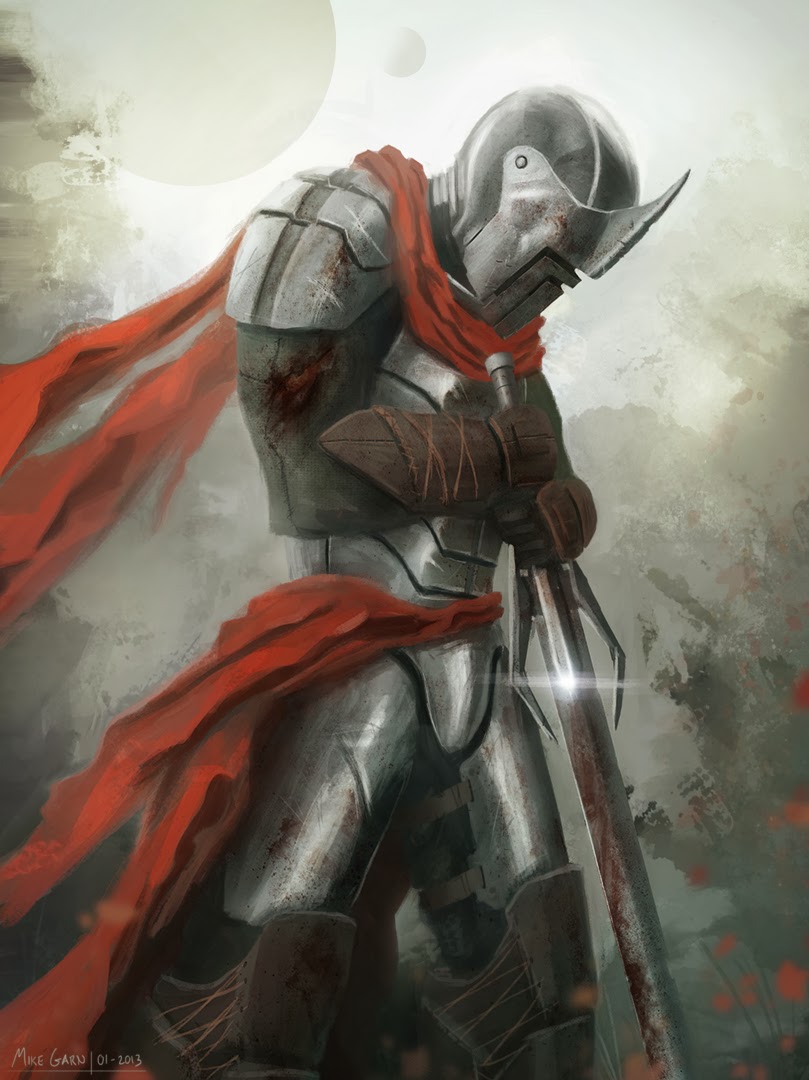 [JANUARY 2013]
I remember when I was painting this I thought it would be the next stage of my artistic metamorphosis. If anything I think it was a step backwards compared to what I'd done. This image was one of the first images I really started trying to push story, something I'd stopped doing from when I first started.

[FEBRUARY 2013]
I was finally understanding perspective and experimenting with camera angles! I'm starting to develop concepts a bit more. Around this time I bought a nice laptop so I could draw during my down time waiting in the bus yard lounge I worked at. That was such hell drawing there. 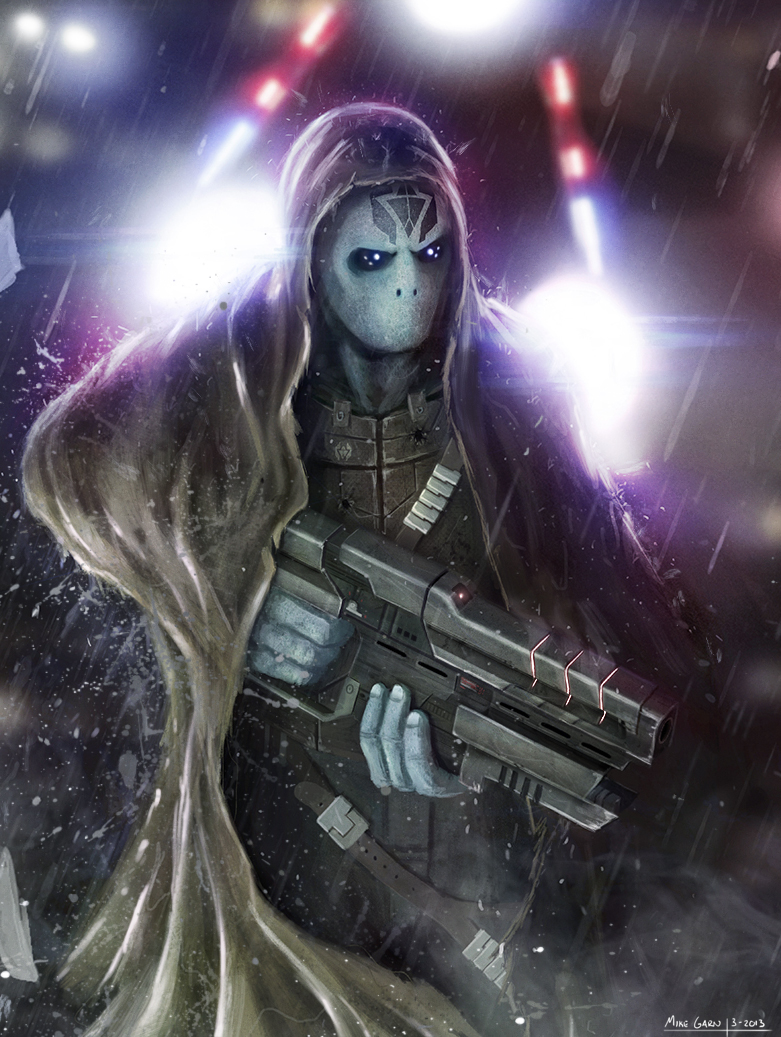 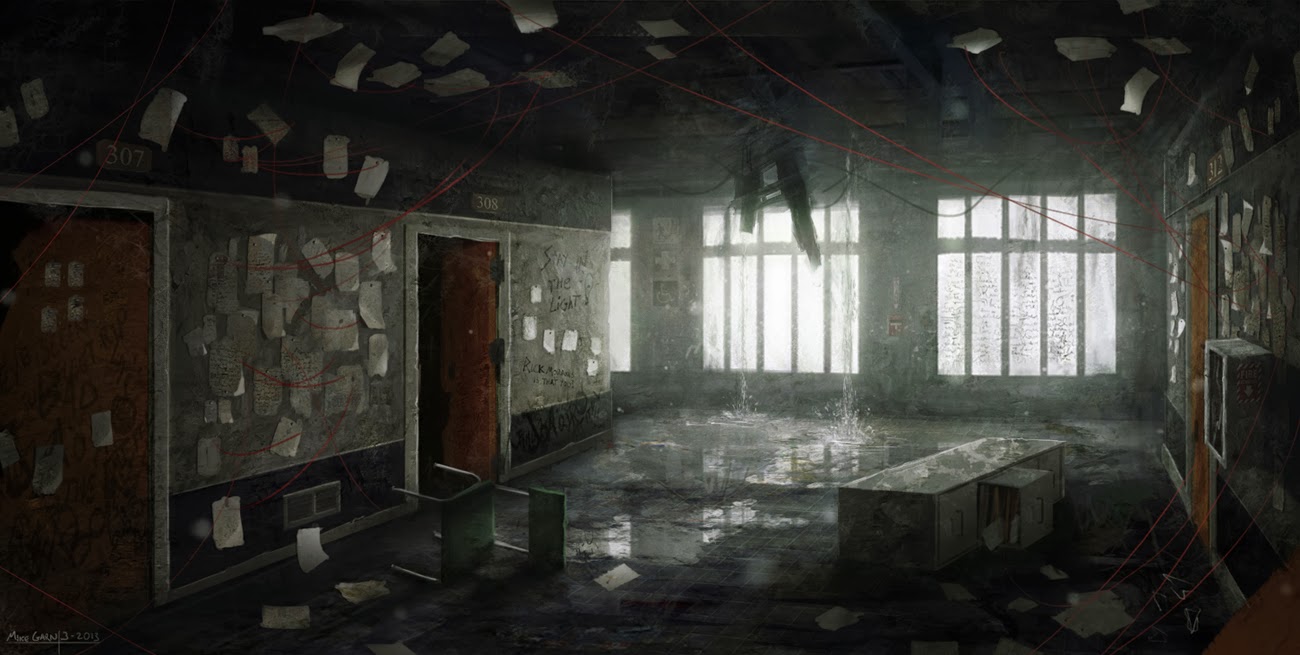 [MARCH 2013]
Hell yes! Things are really starting to click. Putting together everything I've learned into a cohesive piece. Although there's a lot of mistakes in this image like nasty edge work and areas that aren't quite figured out, but it's values are decent, perspectives alright, and the laying out of objects in the scene is getting there, it feels alive and tells a story. For that reason I consider this my first real concept art piece. 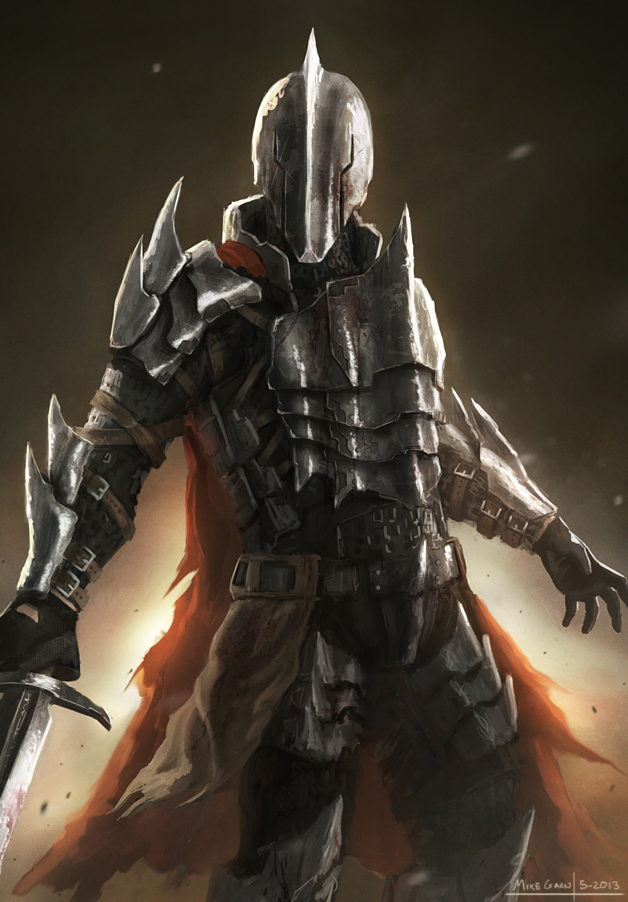 [MAY 2013]
And now we arrive at the end of the tour. I remade the knight image from January 2013. It still racks my brain to think how I excelled so much in a 4 month time. It's amazing how much motivation you can get if you get desperate enough. The struggle was so real. When I drew this image I never could have imagined how close I was to completely changing my life. A year later I'd get my first studio job at One Pixel Brush and be working on the most prestigious AAA games in the world. It's the hardest thing I might ever do, but it was worth every brush stroke.

If you want to know more check out my blog, it's super boring, you'll love it!