Well I haven't had much time lately for any serious paintings, mostly just scribbles in what should be my biology notes. The good thing is that it's given me a lot of time to think of some new concepts that I will be drawing soon. Also I've decided I'm going to do a series entitled "Basic Mechanics" which will be several paintings of robots doing various ironic things. I'm pretty excited to start on that and expand my portfolio.

On another creative type note, I've finished the first draft of the first chapter in a sci-fi horror novel I've been preparing to write for two years. I don't want to let out anything more than it's a sci-fi horror, and is a concept that hasn't really been expanded much upon. So I hope within a year it will be finished. Until I reveal the title of the novel I will refer to it publicly as "Project Eprith".

On ANOTHER note, I was on the official "Dead Space 2" forum trying to get the nitty gritty on the new sci-fi horror survival game when I saw that someone was making one of the creatures from the game out of clay. So armed with the thought that I need to make something out of clay I'm brainstorming ideas. It will probably be a concept sculpture of one of the creatures from my novel. 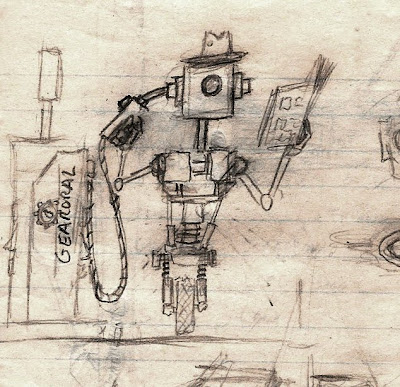